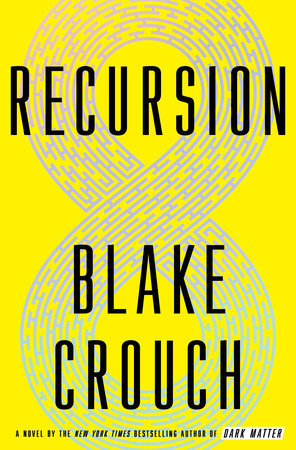 A fast-paced, mind-bending thriller that could only come from the likes of Blake Crouch!

It’s 2007 and Alzheimer’s disease is becoming more prevalent with no apparent cure in sight.  Helena Smith’s mother is a victim of the disease and she has made it her life’s work to combat the disease with science.  As a researcher, she hasn’t made much progress, but all that changes one day when a stranger walks into her lab and offers her an open checkbook to build the contraption that she dreams of: a memory chair.  Now secluded on an abandoned oil rig that has been outfitted into a secret laboratory, Helena is making advancements on her chair light years ahead of where she was at Stanford.  Once her team finally manages to capture and recreate memories, Helena can’t wait to use it for her mother.  But the chair’s mysterious benefactor seems to have other plans for the chair’s use, plans that she never saw coming or thought possible.

Ten years later, New York City cop Barry Sutton is called to a potential suicide jumper.  As he tries to talk her off the ledge, she confesses that she has FMS or false memory syndrome.  Becoming more prevalent, people are stricken with a second set of false memories of a completely different life that they never lived.  In many cases, it drives the person crazy until they commit suicide to escape from the madness.  Although Barry tries to persuade her, he is unsuccessful, and she jumps to her death.  Experts aren’t sure how the disease is transmitted nor is there any known cure.  He only hopes that he hasn’t contracted it from this woman.  As Barry investigates what loose ends there are, he finds something that doesn’t add up.  What Barry doesn’t realize is that this investigation will set forth a series of events that will change the world as he knows it, and possibly several other alternate worlds too!

Only the mind of Blake Crouch could conjure up a thriller this mind-bending.  His previous novel Dark Matter was such an intense read that it stayed with me for days and I kept telling people about it.  This was just as intense and will be sure to make my top list for the year.  Crouch has a way of making his reader’s question what they think they know.  Sure, it’s science fiction, but just think about it if it were true.  Disrupting the space-time continuum would cause all out chaos.  Where his previous novel dealt with string theory, this one focus in on actually traveling back in time and the ramifications of even living the exact same life over again.  He makes theoretical physics fun to read about and will hopefully inspire some future minds to continue developing this type of science.  I also just learned that this is going to become a movie on Netflix in 2020, so I highly recommended getting your copy now so that you can digest this awesome read.

There is quite a bit of strong language throughout the book as well as implied sex scenes  that is more appropriate for mature audiences.