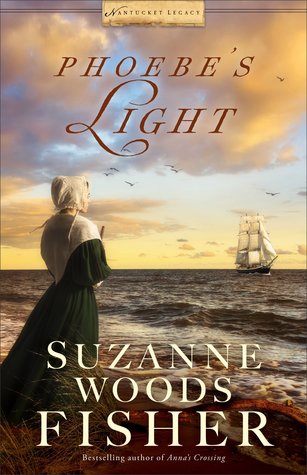 The first book in the Nantucket Legacy series finds Quakeress Phoebe Starbuck overjoyed that the widowed and handsome Captain Phineas Foulger has returned with his ship, the Fortuna, overflowing with whale oil.  She has a crush on him even though he is old enough to be her father, and she is overwhelmed when he reciprocates his feelings for her.  Her former love interest, Matthew Macy, and her father, Barnabas Starbuck, wonder what ulterior motive the Captain has for his sudden interest in Phoebe, but all lovestruck Phoebe can think of is marrying the man of her dreams.  Despite their warnings, Phoebe marries the Captain and insists on joining him for a late-season whaling trip.  Matthew joins as the boat’s cooper, and because the regular crew is superstitious of a woman being on the boat, a rag-tag collection of boys and felons make up the new crew.  Phoebe immediately falls ill with a life-threatening case of seasickness, and spends her entire trip in the cabin.  It’s only when they finally encounter land and she is able to recover in a local’s home that she sees the captain’s true colors.  He leaves her on the island with Matthew and continues his search for whales, which gives Phoebe the time she needs to come to her senses.  She also discovers why he married her in the first place, so she and Matthew devise a plan to change their lives for the better once they arrive back on Nantucket.

This is a great book told in two different perspectives.  The reader keeps up with Phoebe’s daily life through narrative, and her history (and family secrets) are revealed through her great aunt’s journal entries.  As Phoebe reads the journal, readers are told the story of how Nantucket was settled and how Phoebe’s aunt became a wise and prominent citizen.  The history of Nantucket is told through this story, and while some names and places are fictional, many of them are true.  It’s a new history of America that has not been told often, and it’s told from a fascinating perspective.  I absolutely loved learning about the Quakers and settling of Nantucket through this compelling and fast-moving story.  I was never bored or left wondering why I picked up the book, and the characters, although good people, are flawed and therefore relatable.   Even Phoebe, the seemingly most pious character, has flaws that we all have experienced at some point of our lives, so she brings our sympathy instead of disinterest.  All in all, the book was interesting and fun without dwelling too much on any one thing.  I highly recommend it to readers who enjoy historical novels with a smattering of romance thrown in for entertainment.

There is some violence in the book that is mild by today’s standards, and there is also some drug abuse.  Overall, however, Phoebe’s Light does not have much objectionable in it.  Adults and mature teens should be fine reading it.