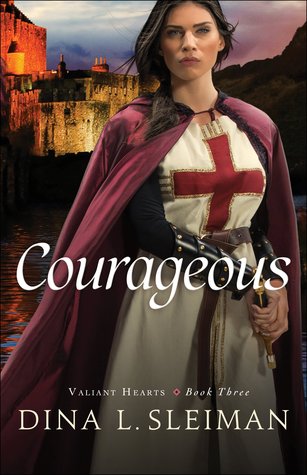 A new tale, a new heroine, and a great conclusion to the trilogy!

I received a complimentary copy of this book from Bethany House in exchange for an honest review. The views expressed in this review are my own.

Rosalind of Ipsworth has shouldered a burden for a sin she has committed for a long time. Determined to atone, she trains to take part in the crusades.  The Duke’s niece had a vision to go on a crusade and release the captives from the Holy Land.  She also saw that children should be included in this crusade.  Rosalind is assigned to oversee the children, but can also fight if she must.  Once this is over, she will join the church convent to play out the rest of her life.  But for some reason, young men seem to feel that she is available for their courtship.  Of anybody, she feels most connected to Sir Randel Penigree, but he is also destined for a life of solitude as a warrior monk.

Sir Randel Penigree is haunted by his past involvement in wars. In an unfortunate battle in England, his entire regiment was destroyed by the Scots.  He even accidentally killed one of his own men and carries that with him everywhere.  Now he has been tasked to lead the army going on the crusades.  However, someone is with the group that wants to avenge the previous death he caused and stop at nothing to complete it.  Will Randel be able to become a warrior monk or will he meet his own doom at the crusades?

Thank you Dina Sleiman for continuing Rosalind’s story. In my review of Chilvarous I concluded by pleading with the author to write Rosalind’s story for the next book and I’m so glad that she delivered.  This was a story about courage, but even more about forgiveness.  Both of the main characters, Rosalind and Randel, were carrying their burdens even after they had been forgiven.  They couldn’t forgive themselves. But with the help of Father Andrew, they finally see that they have been set free.

The story lime is similar to the other two books. The two main characters have a love story.  There is a villain that is after the male main character.  In the end, hope prevails and love conquers all.  But it is a really good read and highly recommended.