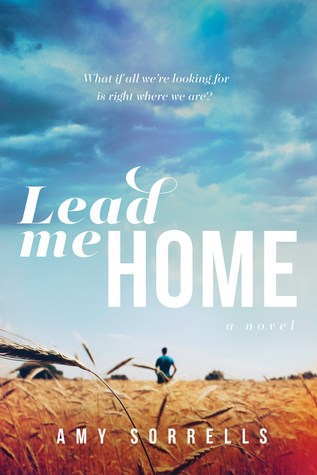 Lead Me Home tells the story of two very different people in Sycamore facing some similar and real struggles.  Reverend James Horton has just been told that because of unsurmountable financial debt, his small Midwestern church will be closing.  His congregation has dwindled to just a dozen or so regulars anyway, and he feels that he is just going through the motions of being a pastor.  He is dealing with the recent sudden death of his wife, Molly, and trying to keep his teen daughter Shelby from going wayward as she tries to deal with losing her mother.  He feels responsible for the closing of the church and blames himself for the congregation’s decline; he noticed people leaving for the megachurch down the road but did nothing to bring them back into his church.

Just down the road, Noble Burden has his own issues.  While he is glad that his abusive, alcoholic father has left the family, he is now responsible for running the family dairy farm.  His loyal older brother, Eustace, is good for providing muscle to help, but he has some kind of undiagnosed disorder that prevents him from really taking charge of life on the farm.  Just as Noble thinks he is getting caught up on all the chores and the repairs, something else puts him behind.

The plot of Lead Me Home is not original, but the characters and the overall message make it a worthwhile read.  James is a pastor, yet he is also portrayed as a real person with his own flaws and struggles.  He believes that, as many people do, a church leader is a strong person who solves all problems and who makes everything right.  In this case, he ends up losing the church due to modern challenges.  Noble wants to be a country singer and is given the opportunity to record in Nashville; the signing contract alone is more money than he’s ever seen, and the agents promise a new home and more services to help Eustace.  With so much on the line, he doesn’t know what to do, yet he knows he has to stay true to himself.  When he connects more with a custodian at the studio than he does with the people who want to make him famous, he has some serious thinking and praying to do.

The title is perfect for this book because both characters, as well as a few others, use this time of challenge as their way to find their paths in life.  Whether it be a career, a family matter, or a literal place to call home, the characters draw on their strength and their faith to find their true meaning of home.  Along the way, they make their community part of their lives and demonstrate grace to their neighbors.

Lead Me Home contains mild profanity and brief mention of domestic abuse, but nothing too graphic.  It is well-written with developed characters that are easy to like.  It focuses on accepting grace in one’s life and extending it to others.  I recommend this book for mature teens and adults.  I enjoyed reading about the daily spiritual and physical struggles of the characters, and I am sure others will as well.