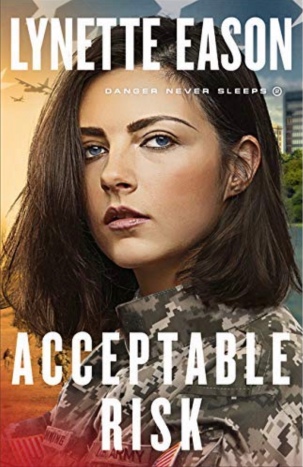 Another fantastic installment in the Danger Never Sleeps series! Lynette Eason has delivered her best book yet! She continues to get better at giving readers the story they want and so much more. Acceptable Risk is at the top of my list for best of the year so far.

Sarah Denning joined the army to become a military journalist and uncover the truth where others run from it. While in the Middle East, she is attacked and taken prisoner. A group of special soldiers is sent in to rescue her, including former Army Ranger Gavin Black, who was asked by Sarah’s father, a General in the army, to rescue her. Once Sarah is back home in the States recovering from being taken hostage, she finds out her father helped have her discharged on a false psychiatric evaluation. She will stop at nothing to prove to him and anyone else that she is still fit for duty and ready to return to her unit. Before she can do that, she learns of her brother’s suicide and can’t believe he would do such a thing. Now, Sarah must use all her journalistic abilities to find out the truth of what happened to her brother. In order to do that she is going to need help, so she asks Gavin to assist in her investigation to determine the truth and uncover the biggest story of her career.

Lynette Eason seriously gets better with each new book. Every time I pick up one of her novels, I know I am going to be in for a thrill ride. I had such an easy time connecting with the characters in this story, the way she started with Sarah in danger but doing all she could to protect others captured my attention and kept me on the edge of my seat until the very last page. My biggest complaint is I didn’t have enough time to just sit and read this cover-to-cover.  I absolutely loved the way I was able to immediately connect with Sarah from page one. I felt for her and wanted to see her come through the whole ordeal alive and safe. The relationship she had with each male in her life was so different and portrayed so well. Her father’s treatment of her only spurs her on to prove she is capable of so much more than he realizes. Their relationship hit home for me and was so raw and believable. The way Eason wrote Sarah at the first half of the book was perfect for me. She is recovering from tragedy and having to rely on others around her but refuses to play the victim and puts every ounce of her soul into doing what she can to help those around her.

I feel like each time Lynette Eason releases a new book it is my new favorite, I didn’t know if she would be able to top Vow of Justice but Acceptable Risk might just beat it, if not I’ll have to call it a tie. I recommend this book to anyone that loves a fantastic romantic suspense, with characters they can cheer on and a story that will pull them in and keep them on the edge of their seat. It is the second in the series but could be read as a standalone if so desired.