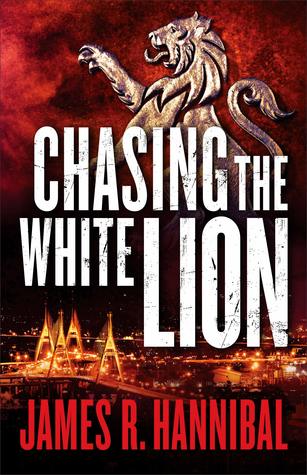 With lots of action and gallivanting across the globe, Chasing the White Lion will leave readers on the edge of their seat!

Talia Inger has had to come to terms with the man that killed her father. As a CIA officer, Talia sees a lot and has learned to put up with a lot, which has helped her to be able to work with this man. With him and the help of his friend, Valkyrie, Talia is going to try to infiltrate the Jungle, a crowd sourced crime syndicate that is involved in trafficking of children. Each step Talia takes moves her closer to the top of the food chain in the Jungle and to the White Lion. With her team to watch her back, she goes full force into the Jungle to save lives and take down the White Lion.

The follow up to The Gryphon Heist picks up right where readers left off with Talia and her crew. The overall story is very enjoyable, but I have had a hard time connecting with the characters. I liked the story arc of Talia trying to rescue the abducted children. That particular part of the novel really pulled me in, as for the rest I just couldn’t connect and didn’t feel as if I had a vested interest in the characters. When Talia was working towards that goal, I could feel the passion coming from her and her crew. She had a really good dynamic with Val and the way they played off of each other helped to move the story along. I’m intrigued enough to continue with the series to find out who the ultimate “bad guy” is and what the end game will be. So much of the novel is spent in so many different settings the reader will feel like they are going on a trip across the world. This is one that readers will need to sit down and take their time with, not one to read if you are going to rush through and not pay close attention to detail. One of the things Hannibal is best at is the detail he puts into each scene; each change brings about a new picture in the mind of the reader, which I greatly enjoyed. Readers that love mystery thrillers will want to be sure and check this one out, after reading the first in the series.