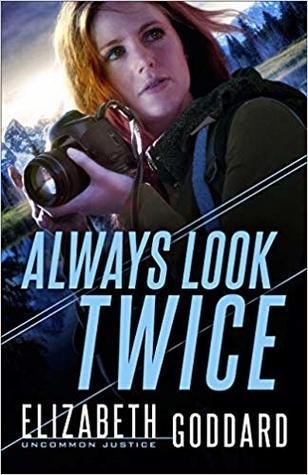 Elizabeth Goddard has done it again! So many spectacular lines and scenes throughout this book make it a can’t miss for romantic suspense readers.

After being a crime scene photographer, the pictures she has taken along with the trauma of her past force Harper Reynolds to take a year off to focus on some of the more beautiful things she can photograph. Traveling the country with her sister and taking pictures of national parks has been the serenity she needed to sooth her soul. Their last stop before heading home is in Jackson Hole, Wyoming. Harper is taking pictures of a bear when she captures a murder. Fearing for her life, she takes off running and loses her camera with pictures of the murder in the process.

Heath Mckade is taking tourists from his ranch around the mountains when he hears shots break out and finds Harper. He is also a reserve deputy for the county and is surprised to find his childhood friend back in the area and in danger. When the sheriff goes to investigate, they can’t find any evidence of a crime and they start to wonder if Harper imagined the entire thing. Together, Heath and Harper must work to prove she saw what she said she did and also to find a murderer before anyone else gets hurt.

Elizabeth Goddard has crafted another great tale of romance, suspense and intrigue. I loved the way she crafted the characters of Harper and Heath and their interactions. Heath I really loved; Harper was great except for the way she let the past drag her down so much. It took away from her as a character and her potential strength. I absolutely loved the line , “She focused her camera on the killer, taking a kill shot of her own.” It was brilliantly done and made the book. Harper was a strong character and other than focusing on the hardships of her past she did grow throughout the story and ended up a character I was rooting for. We can all get stuck focusing on the past and if we do that it can cause us to miss the most wonderful things God has in store for us in the present and future. The suspense was great and the romance hit at just the right moments to make a great story. I would recommend this book to fans of romantic suspense and fans of Goddard. Even if you haven’t read the first in the series this would be a great one to pick up and enjoy.