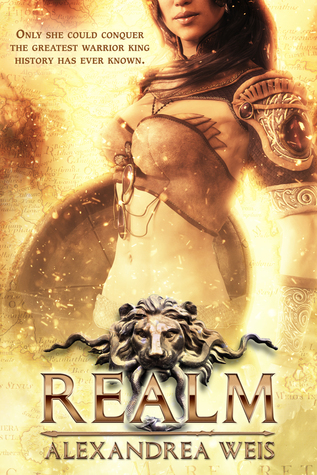 Behind every great leader is the woman he loves, even if she is not his queen.

Roxana is the daughter of a Persian tribal chief who stands at opposition to Alexander the Great.  But when he is territory is conquered, Roxana’s father must make a treaty or lose his life.  He decides to make peace with Alexander and offers his son to serve in his service.  Later that week when they are having a great banquet, Roxana is presented as the daughter of the chief.  Alexander is quickly taken by her exquisite beauty and knows that he must have this woman as his wife, which comes a quite shock to everyone.  The leader of the Greeks marry a Persian?  Certainly not!  But yes, Alexander wills it, so it does happen.  Roxana, who is immensely terrified, is suddenly thrust into a marriage with the most powerful man in the world.  She comes to love Alexander as he is tender and thoughtful to her.  He appreciates her intellect and quick wit that can match his own.  But being married to the most powerful man on earth has its own consequences.  She must watch out not just for Alexander but also for herself as jealously and treachery lurk at every turn.

I love a good historical fiction novel that incorporates actual events within the story to make it seem more alive.  Alexandra Weis did a tremendous job in her research to bring the story of Roxana to life.  Many have heard of Alexander the great, but history books haven’t done such a great job of teaching about Roxana to the masses.  She was no doubt unparalleled in beauty, but I loved that she was smart, knew multiple languages, and could match Alexander the Great in a game of wits.  It’s fun to see strong females in lead history roles when so many were suppressed.  That said, Roxana was a wide range of emotion, but I think that is true to what someone would have been feeling in her position.  From thrilled to sorrow to strength, she embodied it all.  I would love to see more stories like this one come to life.

I received a complimentary copy of this title from the publisher.  The views and opinions expressed within are my own. ;\lsdpriority5