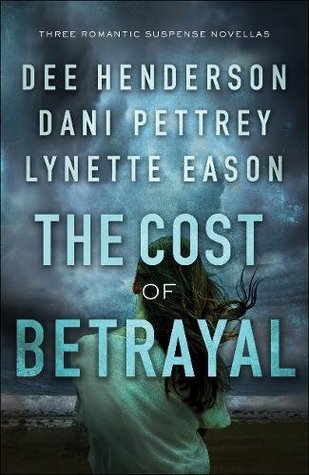 A collection of novellas by three of the leading authors in Christian fiction makes for a great read.

First up is Dee Henderson’s Betrayed. After spending years in prison Janelle Roberts is freed after an FBI Agent and his wife buy a box of possessions at an auction and find evidence showing there is no way she could have committed the murder she is accused of. To keep Janelle safe, they hide her away while they all search for the murderer who is still at large and might threaten Janelle’s life and freedom.

Second, we have Dani Pettrey’s Deadly Isle. When a storm hits her childhood home, Tennyson Kent is trapped along with the rest of the island residents with a murderer. The storm cuts them off from anyone that could help. Together with Callen Frost, her first love, Tennyson hopes to figure out who the killer is and stop anymore tragedy from coming to their island.

Finally, Lynette Eason’s Code of Ethics gives us the story of Ruthie St. John saving the life of Detective Isaac Martinez. Isaac is trying to prove one of the others on the squad is betraying all they believe, and it puts his life on the line.  Together he and Ruthie must stay alive and prove who in the department is corrupt.

This was a great group of stories and even though they don’t tie in to one another, they are very well written. I think when I started this I was expecting the stories to connect in some way and was a little confused when they didn’t. Had I realized this to begin with, it would have helped while reading. The first story to me was the slowest to get through. Deadly Isle and Code of Ethics were really quick reads and made the entire set worth reading for me. I really enjoyed the fact that Eason’s Code of Ethics tied in with her latest series. If any are like me and the first third seems a little slow to you I recommend sticking with it through the other two thirds where the suspense really kicks it to another level and the stories are extremely riveting. I recommend this to readers who enjoy all three of these authors and enjoy a great romantic suspense reads. I have the feeling that some of these stories will be further developed as time goes on, either in another collection of short stories or on their own. Either way I can’t wait to see what happens with these characters.