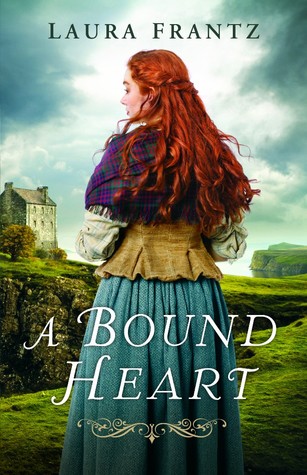 Laura Frantz introduces readers to Lark MacDougall, a Scottish maid, and Magnus MacLeish, a Scottish lord.  Growing up, the two were inseparable as Lark’s maid raised her alongside Magnus after Lark’s family castle crumbled with the loss of the family’s power.  Lark was forced to become a servant, but because of her family ties to Magnus, she had opportunities uncommon to her new class of citizen.  Lark becomes the castle gardener/herb grower and is responsible for making healing poultices and potions out of the herbs and honey she collects from her bee skeps.  She and Magnus maintain a strong bond even though he eventually marries a woman of means and high rank in society.  Unfortunately, his new wife, Lady MacLeish, is unable to have children, and one night, in a fit of despair, she gets into Lark’s herb cabinet.  There she drinks a potion that alters her mental state, resulting in her falling off a cliff to her death.  Despite the cabinet being locked and her not even being present, Lark is charged with Lady MacLeish’s death, and for defending her, Magnus is charged as well.  Both lives are spared; instead of most likely dying in jail or being hung, the pair is put on a convict ship headed for Virginia.  The majority of the story follows the lives of Magnus and Lark as they reach their new homes.

A romance with a great deal of fact woven into it, A Bound Heart fascinates and captures the hearts of readers through adventure, romance, tribulation, and faith.  Lark is a good girl who doesn’t have much experience in the world outside of her herb gardens, but she is fortunate to be taken under the wing of the kindly woman who oversees the plantation where Lark has been indentured.  Lark is given a job tending to the flowers and herbs, and it suits her just fine.  Magnus faces an uphill battle against a slave-owning culture in sugar cane fields.  After being transported to the Caribbean Magnus finds himself as a field manager on a sugar plantation.  Used to being the one in charge, he now has to follow the orders of landowners despite knowing from experience that working with the laborers is more effective than working against them.

The characters develop as the book progresses, and the historical significance keeps interest while educating.  Several tertiary characters provide more story development and conflict to make things much more exciting.  Frantz uses common Scottish dialogue throughout the book, especially at the beginning when they are still in Scotland, to provide authenticity.  It’s difficult to understand at first, but is explained enough and is used with enough frequency that readers should not have any trouble understanding the story.  The development from arrest to sea voyage to the new life for each moves along at a pace that does not seem slow; rather, things seem to happen quickly enough that a lot transpires in a short amount of time.  I sped through this book and enjoyed every minute, never wishing that I was further along than I was.

A Bound Heart offers something for historical fiction and romance readers alike: adventure, star-crossed lovers, complications, separations, and facts about a new place.  I enjoyed it immensely and believe that readers of this genre will as well.

As a word of caution, I must mention that there are some topics that require consideration.  There are some threats of sexual violence as well as physical violence.  Language is often harsh, but never downright profane.