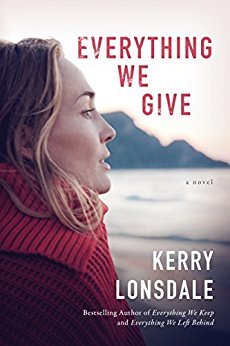 Series: Everything We Keep #3

The thrilling and insightful conclusion to the Everything We Keep series!  Summer must read for sure!

Ian Collins is married to the woman of his dreams and a father to his beautiful young daughter. As an accomplished photographer, he has just completed a successful show of his work when he gets a call from National Geographic.  The magazine loves the images he did of the Rapa Das Bestas Festival in Spain, so much so that they want to send him and a writer back to Spain to get more images and a narrative for the magazine.  There is even a good chance that this could be his chance to land the cover image.  Everything is going great and he plans to celebrate with his wife Aimee.  Except he can’t find her and she isn’t answering her phone.  He finally finds her at a friend’s apartment and discovers that she has talked to James, her former fiancé who now lives in Hawaii.  She is really shaken up and having a hard time.  The next day, James comes to talk to Ian as well, which goes about as well as expected.  Ian realizes that they will probably never see James again and is shocked when he gets a card from James with the phone number for a woman he has been searching for that may have answers about his mother.  This brings to surface all of Ian’s abonnement issues that could further threaten his marriage.  Can Ian manage to save his marriage and finally get closure for his past?

First of all, thank you to Kerry Lonsdale for dedicating this book to her readers. This series has been phenomenal and keep me anxious for each character’s backstory. Everything We Give is no exception.  This book dives into Ian’s backstory, who had a substantial role in Everything We Keep and he fell in love with Aimee and was the right fit for her.  Now readers get to understand what makes Ian have some of the issues he does.  Young Ian’s mother had dissociative personality disorder, so she would shift between being people in her mind.  I’m not sure how anybody could cope with this, but Ian become her primary caretaker until an event that led to his mother being placed in prison.  He has carried this inside him for his whole life and never even opened up to Aimee, which becomes a bit of an issue to say the least.

I’ve always enjoyed the setting in California in an area that I know well, but shifting part of the story to Spain was amazing as well. Getting to read about a culture and events that I don’t know much about are always an added bonus.  This is a very anticipated summer read that I can’t recommend enough.  There are some minor cases of strong language and sensuality, but nothing too extreme.  Grab this book or the whole series and enjoy every bit of it!

I received a complimentary copy of this book through the publisher. The views and opinions expressed within are my own.

2 thoughts on “Everything We Give”