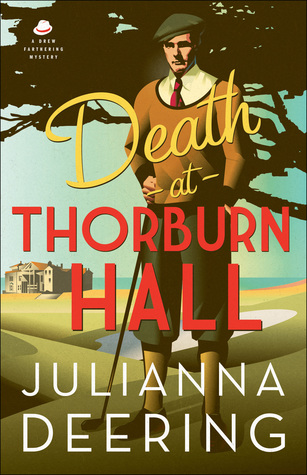 Mystery lovers will delight in another fantastic Drew Farthering mystery!

Drew and Madeline Fathering are looking forward to enjoying the invitation to go see the British Open at the Muirfield course in Scotland with Drew’s cousin Lady Rainsby. Drew hasn’t seen Lord and Lady Rainsby since he and Madeline were married and is curious as to the invitation, but happy nonetheless.  Added to the excitement is that Madeline’s friend Carrie Holland is coming from America to stay with them as well.  She and Drew’s friend Nick Dennison were quite the item before the four of them were nearly murdered a year and a half ago and since then Carrie has lost her father and remainder of her family in America.  Shortly after arrival, Lord Rainsby pulls Drew aside and tells him some suspicions of his business partner and asks Drew to do some investigating discreetly.  Not long after this, Lord Rainsby is killed in an unfortunate horse riding accident, but things don’t add up to it being an accident.  As the crew investigates, each person involved seems to have a motive to kill Lord Rainsby, but then other murders begin to happen.  Can they solve yet another case?

So this story had a little different approach than some of the previous mysteries. Typically, they center around the mystery itself and Drew, Madeline, and Nick solving the case together.  In Dressed for Death, Carrie was also involved, which made it even more interesting.  However, this time the story still centers on the mystery but also on Nick and Carrie’s relationship and what is going to become of it.  The only downside is that it took away from some of the banter between characters that I always look forward to, but the characters are also maturing as the series progresses.  As always, the story is fun to read, the scene is set very well, and the mystery is fun to solve.  I pretty well had the villain pegged early on, but not necessarily for the reasons that he or she may have had.

I’m hoping that this series continues as Deering is beginning to venture into pre-World War II having mentioned Hitler in several instances of this story. I would like to continue to see all of the characters grow and develop.  After all, the next logical step for Drew and Madeline is children and wouldn’t that be a huge adventure for all?