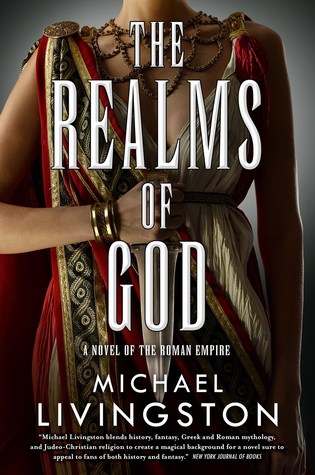 A terrific ending to a fantastic trilogy!

Twenty years has passed and we find that time has once again continued to move on. King Juba and Cleopatra Selene have reigned in peace without interference from Augustus Caesar or Tiberius.  The ark of the covenant has been safely place in Petra in an abandoned tomb, continually watched over by Titus Pullo and Lucius Vorenus, who are also raising Miriam, the daughter of Caesarian and Hannah, who gave their lives protecting the ark.  But evil still lurks by the way of the demons released by King Juba while trying to get revenge for Tiberius’s rape of Selene.  The demons have acquired two of the shards and are now in league with Tiberius to retrieve the remaining items and will stop at nothing for ultimate power.  Can the unlikely band come together a final time to make a stand to protect the world?

I have not enjoyed a series this much in a long time. After reading the first novel, I couldn’t wait for the second.  After the second, I endured another agonizing year for the third.  After the third, I am happy to say that I enjoyed the conclusion even though I long to see it continue out even more.  The character’s personalities really brought this to life for me.  It helps that I’m a huge fan of ancient Rome as well.  I haven’t been much of a historical fantasy fan in the past, but this series has put it on the map for me.  Bringing together some of history’s well known characters and coupling them with an intriguing story is the way to go!

This particular book did not make me research as much as the first two did on the campaigns of Octavian. Even so, I did have to look up more on the city of Petra to get a feel for where I was being taken.  Livingston is a master of tales and I highly recommended this series to all book lovers.  There is some slight harsh language and a brief sex scene, but nothing is really explicit.  Even so, mature YA readers and up should handle this book.

2 thoughts on “The Realms of God”