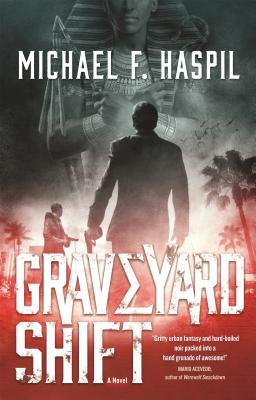 Vampires and mummies as part of today’s society? Interesting….

Alex Menkaure works in a special police unit in Miami that oversees vampire crimes. Since a blood substitute was released, legislation was passed that allowed vampires to integrate into society.  However, that doesn’t mean that everything runs smoothly.  Alex has been fighting vampires for years, centuries even.  You see, he was a Pharaoh and then mummified and since then he has lived through wars, revolutions, and vampires.  But when a group begins poisoning the blood substitute, tensions between vampires and humans rise to a new level that threatens to destroy Miami.  Can Alex put a stop to it before it is too late?

So this was different! A mummy has a main character that has a good friend that is a ancient vampire?  Not at all what I expected when I picked up the book, yet overall it was a very interesting story that I couldn’t put down.  However, there are a lot of viewpoints throughout the book that a reader has to keep following that can bog down the read a little bit.  The descriptions given throughout the book are also very detailed and could have been left more generic to keep the pace moving faster.  One of the things that I love about book from tour is they keep exposing me to new genres.

There is a lot of harsh language throughout the book as well as some sexual references. I recommend this book for mature readers who love a new reading experience.