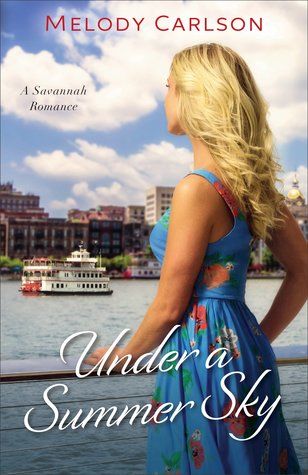 Melody Carlson brings another sweet yet fun romance to her many readers in Under a Summer Sky: A Savannah Romance.  Nicole Anderson, art teacher in Seattle, is languishing teaching high school students.  She knows her lectures are boring and she is not creating art as she had hoped.  With summer break looming on the horizon, she hopes her summer is quiet and productive.  That is, until her mother shows up unexpectedly at the end of her school day on a Friday.  It turns out that her mother’s friends are taking a summer-long tour around the world, and her mother has recommended that Nicole manage the friends’ art gallery in Savannah while they are gone.

The trip is spur-of-the-moment, and Nicole has no formal training to run an art gallery, but she decides it would be fun.  Besides, her childhood crush, Alex, the son of her parents’ friends, is going to be around as he finalizes his divorce.  She knows she can rely on him to help her with the gallery, and maybe start up a romance.  What Nicole doesn’t expect, however, is that Alex is irresponsible with his teenage daughter Bernice.  Additionally, Amyra, her co-worker at the gallery is a snobbish, rude woman who tries to control Nicole.  To make matters worse, Nicole was told that she would be managing the gallery, not Amyra, but nobody told Amyra that.  Nicole must deal with her frustrated colleague while also trying to keep an eye on Bernice.

As the summer progresses, Nicole manages to sell several pieces of art at the gallery while signing new artists.  She realizes she is good at running the gallery and that she has feelings for Alex’ nerdy brother Ryan instead of Alex.  How this will play out with the boys’ sibling rivalry is anyone’s guess.

True to form, Melody Carlson has written a sweet romance novel set in a beautiful setting.  She brings just the right amount of conflict to make the story interesting while not going overboard.  The characters are likeable and realistic, albeit predictable.  Still, for a summer romance with plenty of southern charm, this book fits the bill.

Readers who take this book for its simple romantic story will enjoy it.  There are not a lot of complex situations or characters, but they are fun and easy to understand.  The romance is not bodice-ripper; rather, it’s the first stage of romance that involves butterflies in the stomach and hand-holding.  It’s a fun read that relies as much on the setting as the characters to tell the story.

This is a charming book that does not contain violence, sex, or foul language.  For this reason, I recommend this book for young adult readers and up.  Fans of Melody Carlson and sweet romances in general will find this book enjoyable.