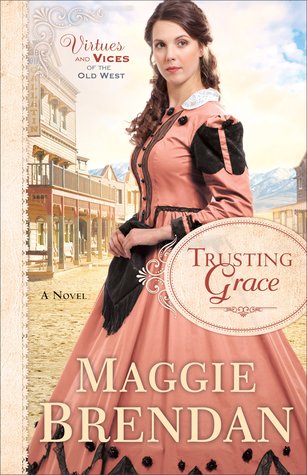 Series: Virtues and Vices of the Old West #3

Even the unlikeliest of characters have a chance at true love.

Robert Frasier feels scammed. He just lost his wife after a few short months of marriage and has now learned that she has three kids after his late wife’s sister drops them off at his door.  To make matters worse, he has lost the family farm to debt and must now find a job to make ends meet.  Wandering from town to town, Robert searches for a place to work.  He finds work at a farm in Montana in the employment of Grace Bidwell.  Hopefully Robert can work the farms to keep himself and his bedraggled children fed and clothed.

Grace Bidwell has always longed to be a wife and mother. But after her husband passed way before they had children, it seems that is an unlikely dream.  She is now taking care of her widowed father whose health continues to get worse.  Her new farm hand Robert is very unapproachable, almost as if he has something against her, but sometimes she still sees a softness to him.  At least with his help she can manage to keep her farm.

A well written book by Maggie Brendan and my first to read by her. Even so, I don’t feel like I lost any portion of the story by starting with the third is a series.  It just picked right up and took me along for the ride.  I’m not sure if there were any history of the main characters in the previous two stories, but I don’t feel like I need them.  The romance between the main characters was set at the right pace.  Not too fast, but not too slow either.  The relationships between the kids and Robert played out well too.  They had a lot of problems getting started, but worked them out throughout the book and became a trusting family.  Grace was a very strong woman, but still had a time of need for Robert when he managed to rescue her in a bad situation.

If you like western historical fiction with some clean romance, I recommend you give this a try.