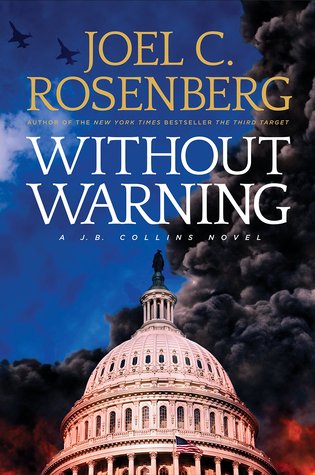 Will ISIS strike on American soil? This is Rosenberg at his best!

J. B. Collins and Yael were part of a team that successfully rescued the President of the United States. Now back in the US for two months, J.B. has been recovering and the President has been launching air strikes and driving ISIS back out of Iraq, but J.B. feels it is not enough. He wants the President to go after the leader, kill the snake by cutting off the head. Then the unthinkable happens.  At the State of the Union address, mortar shells start hitting the capitol building.  A full attack has been unleashed against the President, vice-president, and all the members of congress.  Although the President survives, several members of congress do not.  J. B. expects retaliation, but the President seems to be in denial.  What’s worse is now the attack has turned personal when the terrorist find J.B. and his brother Matt’s family.  If the president is not going to stop ISIS, maybe J.B. can do just that.

This was an incredible ending to the latest trilogy by Rosenberg. All three books flow seamlessly together and can easily be devoured in a short period of time.  The way he writes current events into a novel can be truly frightening.  Suddenly the ideas he has don’t seem so farfetched.  I was glad to see that J.B.’s personal struggles were finally resolved in this book and that he had peace.  I can definitely say that I didn’t expect the ending.  That made me feel like it was cut a little short, even though it is the longest book in the trilogy by far.  I was also really impressed with how Matt handle his suffering.  I thought he might have gone into depression, but he stayed strong throughout.  I was also really disappointed in the romance between Yael and J.B., but given the ending, it is probably for the best.

With high tension, fast-paced suspense, and well developed characters, this trilogy needs to be read by all!

2 thoughts on “Without Warning”