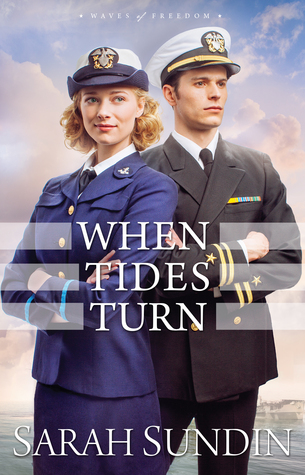 A historical romance that is as frustrating as real love, which makes it all the better!

Tess Beaumont has always been thought of as just a pretty face, and she is tired of it. The Navy has recently opened programs for women and Tess decides this is her chance to put her brain to use as much as her pretty face has been in the past. It is hard work and initially she still must overcome the perceptions she has lived with all her life, but eventually the hard work pays off and she sees herself making a difference.  Love is the farthest thing from her mind, until Lt. Dan Avery shows up.  She has known him for years, especially being close with his sisters.  But when he shows up in uniform, something deep inside her stirs with feelings she hasn’t had in years.  She is determined to stay the course with her work and not let love get in the way.  Dan feels the same way, he doesn’t want love to distract him from his duties, even though he can’t deny the attraction he feels for Tess.  As things heat up in the Navy, there are also conspiracies Tess begins to investigate within her own circle of friends that put her in danger.

When Tides Turn is a book that I initially wanted to give up on, but I’m glad I didn’t.  The ending was well worth the wait; although, the first half of the book wasn’t my favorite.  I did not like Tessa until the end.  I think my problem with Tessa had to do with her attitude towards herself.  She had a problem with being seen as a pretty face and the way it came across to me was more of her being conceited and full of herself.  Yes, she might be pretty, but the way she kept thinking it and trying to keep it from being used against her in any way just rubbed me the wrong way.  And then, when someone she cares for calls her beautiful, she blows up and loses it, not the best way to play that scene out for me.  Other than that, I really enjoyed the book, especially the scenes with Tess investigating her group for spies and the danger that brought about.  I am usually very much into military dramas but that part of the story didn’t get me as much for some reason.  I found myself glossing over the parts on the ships and submarines to get to the rest of the story, it wasn’t as compelling as the rest.  The relationship with her and Dan was a little rocky and back and forth, which is very much like real life, making it more believable.  I think readers that enjoy Christian, historical romances will enjoy this one.