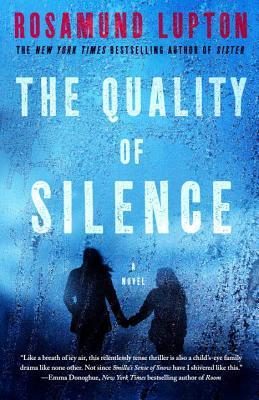 An interesting tale with much potential that didn’t live up to it.

Yasmin’s husband Matt has been off in Alaska studying the wildlife for a documentary. She and her daughter Ruby, who is deaf, are supposed to meet up with him at Christmas.  But after a phone call leaves her with an uneasy feeling, she decides to take the trip early.  When Yasmin and Ruby arrive they find out that the village he has been staying at has burned to the ground and everyone has died in the fire.  Yasmin refuses to believe her husband is gone.  And with no one to continue the search, she and Ruby set out on their own to traverse the deadly Alaskan winter.  As they journey forward, they encounter the worst Alaska has to offer, not only in weather but also with those around them trying to keep them from finding Matt and the truth of what happened in the village.

I really thought this book was going to be geared more toward a YA audience focusing on Ruby and her lack of hearing. While it did go from her view point occasionally, it went from others as well and can’t fully be classified into the category of YA.  The story itself was interesting and had great potential, it just didn’t live up to that potential.  After a little bit, the characters became boring when they should have been anything but.  Then there is the setting, yes it is Alaska with an unending tundra terrain, but it quickly became repetitive and made me lose interest.  The other downfall was the back and forth between past and present day.  I understand the style and what the author was trying to do here but again, it could have been done much better.  The last fifty pages or so the tension really picked up.  It would have been even better if Lupton had made better use of section or chapter breaks to quicken the pace.  Ruby being deaf was an interesting aspect to add to the story and gave it a different vibe, which I enjoyed.  I just wish I could say that was enough to make me recommend to others.