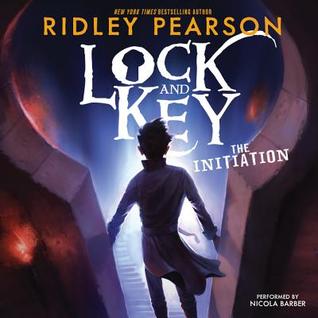 Sherlock Holmes as you’ve never seen him before! A great introduction to the detective for a younger generation.

Sherlock Holmes is a well-known detective, but not as much is known about his youth. Here is a tale of how he begin his rivalry with his most famous enemy, James Moriarty, which is told from the viewpoint of James’s little sister, Moria.  James grows up to be a ruthless villain, but what happened to lead him down that path?  James is put into a boarding school where he winds up the roommate of a British know-it-all named Sherlock Holmes.  Moria attends the school as well and becomes closer to Sherlock, Lock as she calls him, than her brother.  Shortly after school starts, a treasured Bible that is supposedly the family bible of the Moriarty family goes missing causing James and Moria to be caught up in a school wide scandal.  The school imposes mandatory study hall and lockdown until the bible is found.  James has never known of his family to have such a bible here, but all of a sudden clues start turning up leading him on a search for what he thinks must be the bible.  Sherlock helps his roommate and finds that things are not at all what they first appear, leading them to the discovery of a secret society within the walls of the school. With danger around every corner and mysterious dealings afoot, nothing will be the same.

Ridley Pearson has developed a knack for developing stories for that are like none out there. He reimagined the Disney villains and heroes for young adults to read and enjoy, and now has taken on a new direction for us to see Sherlock Holmes that is entertaining, fun, and so enjoyable.  I have heard of Sherlock Holmes but the characters of James and Moira were new to me.  I loved the way Pearson told the story through Moira’s perspective.  It was different and gave a neat view of the story.  At first glance you are think the story took place long ago, that’s what comes to mind for me when I think of Sherlock Holmes.  Interestingly enough, it takes place in the present.  The kids are attending Baskerville academy, a school that doesn’t allow cell phones, making all clues and information a little more difficult for kids and all involved in to attain. At first you might think that Sherlock and even James are the brightest of the bunch, but don’t count Moria out too quickly.  She learns quickly from those around her and with Sherlock to teach her proper sleuthing techniques, she is sure to not be left out of all that is happening around her.  Pearson has become one of my favorite YA authors.  You can count on his stories to be entertaining with much to learn along the way.  With this being the start of a new series, I can’t wait to see what is to come.

One thought on “The Initiation”