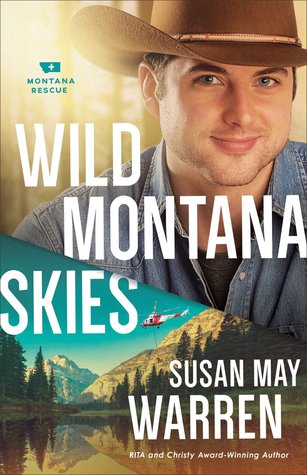 With romance, broken hearts, and a cowboy on a mission, Wild Montana Skies reads better than a country western song sounds.

Kacey Fairing has decided she needs some time away from the military life she has called home for twelve years. She returns to Montana to help with the Search and Rescue team and tries to avoid a past she has tried hard to forget.  During her time in the military, her parents have been raising her now teenage daughter.  She has been the ‘fun mom’ seeing her daughter in between being deployed and trying to make up for time away.  It doesn’t take long being back to realize she isn’t the only one who has returned to their childhood home.  Ben King spent the last decade away from Montana building his life as a Country Music star.  He left when Kacey shut him out of his life.  His mother has died and his father has been injured and now needs his help to run the local Search and Rescue mission.  He comes home to help but has no intention of staying.  As soon as he sees Kacey walk back into town and his life, he realizes his father has an agenda beyond wanting to see his son in calling him home.  Mercy Falls, Montana has had severe flash floods and Kacey and Ben reluctantly work together to save the lives of those in their hometown.  It is going to take all the skills Kacey learned in the military to be able to work with Ben, and he might find new material for his songs working with Kacey, and possibly save a few lives.

Writing a romantic suspense story is a difficult task. You have to find that balance of a good love story but also one that brings the tension to ultimate levels at just the right moments.  Susan May Warren has done a tremendous job with Wild Montana Skies.  The story grabbed me at the beginning and didn’t let up till the last page.  I particularly enjoyed the last few chapters where the suspense was top notch and I couldn’t turn the pages fast enough.  Kacey is a tough, no-nonsense kind of gal who didn’t need a man in her life when so many others would have crumbled if they found themselves in her position.  When writing Christian fiction, you have to be careful about some of the topics you address, such as sex outside of marriage.  With Kacey getting pregnant and not being married, it could have been written many different ways, some good, some not.  Warren approached the subject in a way that made it flow and be incredibly believable at the same time.  Ben might have been a country singer but played the part of ruggedly handsome cowboy that wanted to do the right thing regardless of what he sang about.  I liked the way their relationship played out, nothing felt forced with them, or any of the characters for that matter.  I love the fact that this is the first in a series and we will get to dive deeper into the lives of some of the other characters touched on here.  A fun read that I think many will enjoy, not just those that love romance novels, it goes much deeper than that.