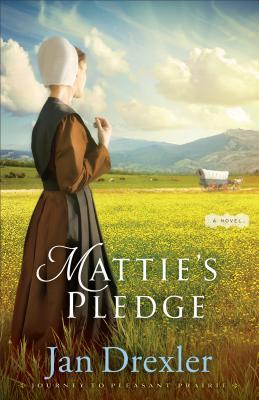 Mattie Schrock and her family are on an expedition west to Indiana with two other Amish families in hopes of joining a new settlement there.  Their current settlement is questioning Amish ruling and being more lenient about the ways of life, which is not sitting well with their beliefs.  Mattie is thrilled that her childhood friends, whom she hasn’t seen in about ten years, are part of the journey.  She is especially excited that Jacob Yoder is part of the group; she had a special connection to him years ago and still has feelings for him.  Of course there are some causes for concern during this trip: Jacob’s mother, who is pregnant, is having complications from the pregnancy; a trio of horse thieves with Cole Bates as the leader follows the group to try to steal the Amish horses while Cole tries to steal Mattie’s heart.

The caravan starts in Brothers Valley, Pennsylvania, and works its way West to Indiana, where the group hopes to join a tiny Amish community already there.  The group leaves in April and finds many adventures along the way; the early spring weather is wet and muddy, so wagons frequently get stuck in ruts.  The sheep they are herding along with them want to veer off the path to find the fresh greenery before dropping the year’s lambs.  Each wagon has to cross the swollen and dangerous rivers on rafts, risking tipping over and losing everything, including lives.  The horse thieves are interested in the beautiful Amish horses, and additionally, Cole tries to win Mattie’s heart.  He keeps tempting Mattie, who wants to head all the way west to Oregon, to run away with him and start a new life far away from her friends and family.  As the group crosses dangerous and mosquito-infested swampland, the situation comes to a head.  Mattie has made a promise to Jacob to consider his marriage proposal, but will she keep it?

Jan Drexler does a great job of describing the land and the people of the story; there is a brief mention on the author’s page about how she has followed the route that the Amish families took back in the 1840s.  Because of this, she knows what encounters they likely had and how they had to overcome obstacles.  Her ability to describe personalities and situations allows for the reader to conjure up everything as it takes place.  I have read several Amish-themed books before, so I am familiar with a lot of their lifestyle and beliefs, but she is able to create a world that anyone who is not familiar with the Amish can understand.  Her thoroughness in researching the travels of these people helps to bring the story to life.

Because this book is written in a time when traveling was a hardship, some events may appear harsh to readers.  The horse thieves are violent and have no issue with killing someone who gets in the way.  Compared to things shown on television today, however, they will appear mild.  There is a slight bit of profanity throughout the book, but nothing overly offensive.  For these reasons, I recommend the book for mature readers.  Those who love stories about the Amish, a good historical novel, or a sweet romance will enjoy Mattie’s Pledge.