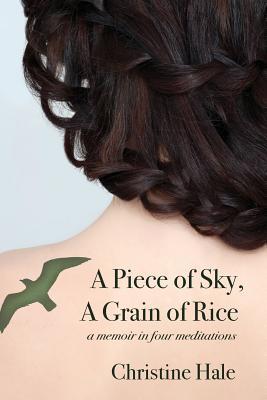 Written in four parts, A Piece of Sky, a Grain of Rice talks about Christine Hale’s struggle to have fulfilling relationships in her life.  A “surprise” baby with eight years separating her from her next sibling, Christine feels pressure from her demanding mother to be the best at everything.  Her mother equates performance with love, and Christine works hard to earn her mother’s love.  Her father disappears to work or to his basement refuge, so she doesn’t really have a relationship with him.  In her later years, she marries as a teen to escape her parents’ control.  She later has children with a different husband and realizes she is in no shape to care for them properly, so she gives custody to their father.  This in turn causes hurt feelings with her children, and she spends a great deal of time reestablishing a relationship with them while caring for her terminally ill new partner.

Having grown up in an emotionally abusive home with older parents who are starting to feel the effects of illness and aging, Christine has to figure out her own way so that she can lead a happy, healthy life.  She studies Buddhism and works with a sage teacher who sends her on retreats so she can learn in quiet solitude.  She furthers her education and creates new relationships with her aging and ailing parents and her adult children.  Things don’t always go right and they are not always easy, but eventually she comes to a peace that leaves her satisfied in how her life moves along.

This book is written in four different parts that describe different parts of her life, and oftentimes it takes a little while to figure out what that time is.  She uses the term “You” frequently to describe specific people or events that influence her, whether good or bad.  The prose is fresh and direct, even coarse at times, as she describes the less savory people and events that made her who she is today.  She shows in her writing how she has risen above the negative in order to accept and hold on to the positive, and it’s clear in her narrative what is good and what is not.

I really enjoyed Christine Hale’s story of how she made something of a difficult life and used Buddhist teachings to do so.  She highlights the struggles without claiming to be the victim; instead, she takes ownership of her situation and makes it better.  She admits to her faults and bares her soul when necessary.  Reading her book, I definitely got to know her better and found a vulnerable person who can inspire and teach her readers.  Some of this book deals with difficult subjects such as spousal rape and emotional abuse, so for this reason I recommend it for mature readers.  Anyone looking for an insightful look into a person’s emergence from modest and abusive beginnings will find this book to be engaging and hopeful.

I received a complimentary copy of this book through TLC book tours in exchange for an honest and thorough review.  The views and opinions expressed within are my own.

3 thoughts on “A Piece of the Sky, A Grain of Rice”