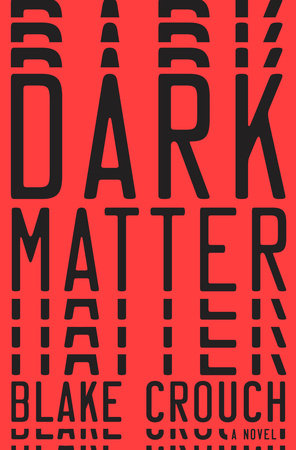 If Pandora’s Box were created in this lifetime, I’m pretty sure this would be its story!  What a ride!

Jason Dessen lives a mediocre life with his wife Daniela and their son Charlie, but he is happy content with it. He had a chance to perform serious research to change the world fifteen years ago, but Daniela got pregnant and Charlie was premature, so he made the decision to give up his ambitions for his family.  Now he teaches at a small local college in Chicago.  One night is old college roommate receives a prestigious award for his research is having a reception at a local bar.  At Daniela’s urging, Jason decides to go, but on the way back is abducted by a man wearing a Geisha mask.  Jason gets knocked out and the next time he wakes up he is strapped to a gurney with a mass of people he doesn’t know telling him how excited they are that he made it back.  He finds that his family is no longer at home and his home doesn’t look like his home at all.  He then finds out that he isn’t employed by the college anymore.  He is the chief scientist for a research company and has apparently invented something incredible.  Only problem is he doesn’t remember any of it and he doesn’t believe it is true.  But to find the truth, it is going to take an incredible journey that Jason will never forget, no matter how hard he tries.

Ok. So this novel pretty much made me use parts of my brain that have either never been used or not used in a very long time.  It made me think so much through the course of the entire book.  Not just about the overall subject matter of string theory, which many people may know from The Big Bang Theory, but from the concepts that the author is introducing throughout this book.  I literally couldn’t put it down, even though my head hurt from thinking so much.  That’s just how good this book was!

This book reads very quickly. The pace is set incredibly fast and doesn’t let up.  Character development was awesome.  I cannot even begin to imagine if this were to happen in real life.  The emotions that Jason showed throughout the novel were very realistic and I found myself sympathizing with him.  As for the suspense, it kept getting changed up just when I thought I knew where it was going.  It isn’t that often that a book keeps me on my feet throughout, but Crouch sure knew how to do it.  You can tell that he is a master story teller and it is no surprise that he has written screenplays as well.  I’m going to be shocked if this is not picked up for a motion picture at some point in the very near future.  And when it does, you can bet I will be there to see it.

The only downside to the story was the occasional use of strong language. This occurs in several places throughout the book, but didn’t really take me away from the story in this case.  Just not a great idea for YA or under.  So, I would recommended this book to older teens and higher!

I received a complimentary copy of this book through the Penguin Random House blog program. The views and opinions expressed throughout are mine.