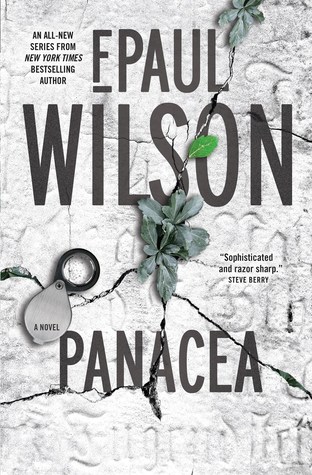 Panacea is a thrilling and captivating tale that is not to be missed!

I received a complimentary copy of this book through St. Martin’s Press for an honest and fair review. The opinions expressed in this review are my own.

Laura Hanning is used to being called out when a body is found to perform an autopsy with no questions asked. That is until she has two charred corpses that generate more questions than answers.  However, she knows they are connected.  Each victim has a tattoo on their backs lead her to their involvement in so called miracles.  The more she investigates, the more things lead her to the mythic panacea, a substance that is supposed to cure anything.  Even though this isn’t something she believes in, she can’t help continuing to search for more answers to these mysterious deaths.  But she isn’t the only one searching for answers.  There is a secret group of the panacea and another group bent on keeping this cure out of the hands of the public.  The 536 brotherhood believes that God never intended such a cure to exist and mankind is meant to suffer.  They believe Laura is in their way and she becomes a target.  Her unbelief is pushed to the limit when a terminally ill billionaire hires her to research the possibility of the panacea.  She is offered an extremely large sum of money, to be used to help her sick daughter, to look for this cure.  His body guard, Rick Hayden is set on keeping her alive and helping her on her quest.  Together they race against the Brotherhood to find this cure, if it really does exist.

At the beginning, I thought I might not really enjoy this book, but that quickly proved not to be the case. The story took twists and turns that didn’t get me dizzy but kept me turning the page as fast as I could.  There was an excellent emotional attachment to each character that made their quest and desires come to life.  Laura and Rick took the brunt of this in very different forms.  Neither was pushed too hard or too little to make everything they did believable.  The entire concept is sort of Da Vinci Code with more of a medical twists.  The writing was sharp and very concise.  The story crisscrossed from one continent to another seemingly effortless which is something very difficult to do.  The story was tied up nicely but I think (and hope) this is the start of a new series and I can’t wait to see where the story goes next.  My only complaint is the language, at times it got above a PG-13 rating which makes me bring it down a little.  The story could have been just as good, if not better without the harsh words.