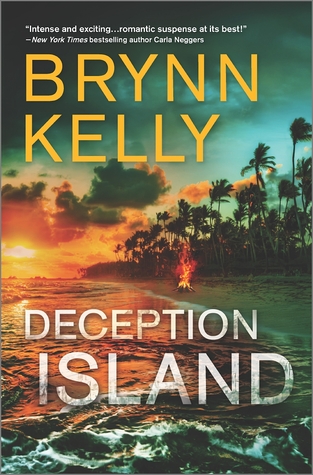 A case of mistaken identity, pirates, kidnapping and romance make for a fast paced thrill ride!

Holly Ryan just got out of jail when she is approached to play body double for a spoiled socialite. It sounds like the perfect gig, until she is snatched off the yacht and held for ransom by a tall dark mysterious stranger.  Fare Angelito tried to be finished with his past, he wanted nothing to do with the horrible things he had been a part of.  Now that his son has been kidnapped, he is forced to go back to the past he has left behind and return to his old ways.  What he doesn’t expect is to fall for the girl he has been told to kidnap in order to get his son back safely.  All alone and deep in the tropics, they find themselves drawn to one another and the passion is hard to contain.

Deception Island starts out with a punch and doesn’t let up.  The tension is set from the start and holds a pretty good pace throughout.  Most romantic suspense novels are too heavy on the romance and the suspense never really gets going.  I felt a good sense of suspense throughout with the romance sprinkled at appropriate places.  The attraction between Rafe and Holly was immediate and well developed.  I did have a problem for the first half of the book with both of them having two different names, their real ones and the ones they were using towards the other.  It was confusing and took me out of the story at times trying to keep straight who was talking.  The timeline going from being kidnapped to falling for one another was a little fast to be believable but in an intense situation these things tend to escalate quicker than normal.  At the heart of the novel was the bond between father and son and how strong that can be, even when it isn’t obvious to the father.

Overall Deception Island was a quick enjoyable read.  It is not for book for a young audience as it contains harsh language at times and some sensual scenes intended for the more mature audience.